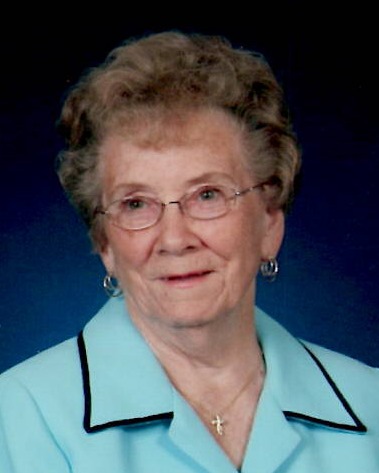 Angeline” Angie” Danniela Thompson was born March 18, 1930, in Viding Township, Minnesota, near Borup, Minnesota. The daughter of Arthur and Junis (Larson) Arre. She passed away Monday November 28, 2022 at the Lamplighter in Detroit Lakes, Minnesota.

She grew up and attended school in Moorhead and Eugene, Oregon. On August 10, 1948, she was united in marriage to Russell Lloyd Thompson at Westbury. They lived in Detroit Lakes until moving to Westbury in 1957.

Angie was a member of Richwood Lutheran Church where she served as Secretary/Treasurer of the Lydia Circle. She enjoyed flowers, oil painting, and crafts. Angie worked at Erie 34 Club, and the Savoie cleaners for 23 years before retiring in 1990.

To order memorial trees or send flowers to the family in memory of Angeline "Angie" Danniela Thompson, please visit our flower store.