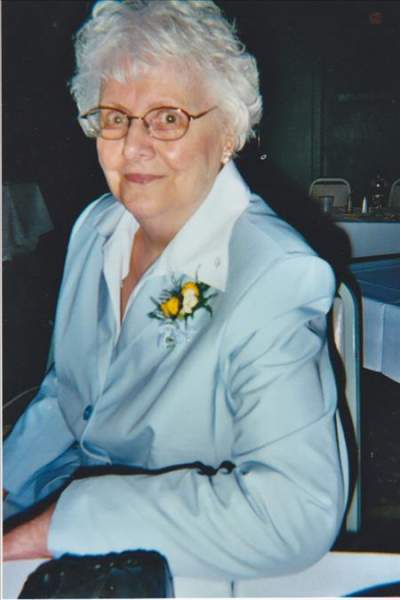 The bells were ringing, the angels were singing, and heaven's gates were open to greet Alvina Ann Meyer. The Lord called her on Saturday, January 7, 2017, to join him and to unite her with all those who have gone before her. Alvina Ann Caspers was born on July 27, 1921 in Detroit Lakes, MN. The daughter of Lawrence and Margareth (Trzewik) Caspers, Alvina grew up in rural Ogema, MN and graduated from Waubun High School. After graduation, she moved to Detroit Lakes. On April 27, 1949, Alvina married the love of her life, Victor Meyer and they resided in Detroit Lakes their entire married life. Alvina (known to many as "Tootsie) was a stay at home mother for her five children. She was well known in the neighborhood and by friends and relatives for her wonderful homemade breads, cookies, and cakes, which she continued to make throughout her life. Alvina's saying was, "I will make bread until God no longer lets me". When her children were all grown, Alvina became employed at St. Mary's Hospital where she remained for many years and developed many friendships. She did lots of volunteering throughout her life at Holy Rosary School, which her children attended, and with organizations she was a member of. These included Catholic Foresters, Christian Mothers, church circle, and VFW Women's Auxiliary of Ogema. Alvina enjoyed baking, sewing, knitting, crocheting, and going to dances with their friends, the many sliding parties and campouts at White Earth Resort, the summers spent at their cabin on Strawberry Lake and camping with the camper she and Vic purchased after retirement. Alvina will be dearly missed by those she leaves behind: her children: Margaret (Gary) McDougall of Detroit Lakes, MN, Jerome Meyer of Detroit Lakes, MN, Beverly (Mike) Juen of Woodbury, MN, Mary Lou Jasch of Detroit Lakes, MN and Dennis "Oscar" Meyer of Detroit Lakes, MN along with seven grandchildren: Shawn (Joanne) McDougall of Boca Raton, FL, Stephanie (Brent) Bultema of Rochester, MN, Matt (Kera) Juen of Nashville, TN, Jessica (Jeremy) Peterson of Detroit Lakes, MN, Jeffrey (Katie) Jasch of Detroit Lakes, MN Dalton Meyer of Detroit Lakes, MN and Brittany (Jon) Zimmerman of Fargo, ND, ten great-grandchildren: Max McDougall, Lucy McDougall, Addison Bultema, Wyatt Bultema, Miles Juen, Kaitlyn Peterson, Ryan Peterson, Emily Peterson, Reed Jasch, Kelsea Jasch, one sister-in-law, Jean Caspers of Detroit Lakes and several nieces and nephews. She is preceded in death by her parents, her husband Victor, brothers: Amor, Gilbert, Val and Rev. William Caspers, one sister: Olivia Chapman, sisters-in-law: Mitzie Caspers and Rose Stalberger, brothers-in-law: Malcolm Chapman, Melvin Stalberger and Peter Meyer, son-in-law, Harvey Jasch and nephews: Curt Chapman and Steve Caspers.

A Rosary Service will be held at 6:30 followed by a Prayer Service at 7PM

To order memorial trees or send flowers to the family in memory of Alvina Meyer, please visit our flower store.